Tradeswomen and advocates protest the Trump inauguration at the Taj Mahal

We were 15 citizens of the United States out of the country on the day that a dangerous and hateful person would become President. We never planned for this to happen. We never planned for the Presidential election to turn out the way it did. We are from all over the country- some from very conservative places where the resentment of deindustrialization and growing income inequality runs deep. Some know no one who voted for him and some have relatives and friends who did. But as union members, we were united in our opposition to the coming agenda of fear, misogyny and hatred towards immigrants.

And women all over the world would be protesting on a Saturday that we had free and where planning to visit the Taj Mahal. We decided to join the protest.

The day began with an “Indian hour and a half” road trip from Delhi to Agra, the site of the Taj Mahal. It took 4 hours. The sun was coming up and the sky was a haze of fog and pollution. I had not wanted to go to the Taj. I am a tourist snob and heard it was overrated, but the other Delegates has overruled me. Good decision, girls and Brian.

On the way, some of us collected scraps of cardboard from roadside tea stalls and gas stations. Someone had a couple of magic markers. We made our signs.

We arrived at the entrance to the Taj Mahal late morning and it was packed with tourists and vendors. It was immediately clear that this was not the right place to protest. In addition to the chaos of the location, we were liable to draw police and that could cause trouble we were not looking for. We had (mysteriously) picked up a guide and translator along the way. By now he was getting the idea and he had us all pile back into the bus. We then drove around the city of Agra until we could see the Taj and have our protest without risking an encounter with the local police. We were a good mile away and the Taj Mahal was a tiny statue in the hazy distance.

Our audience was a few bewildered boys on bicycles and the world of social media. It was a perfect location. 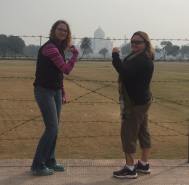 Operating Engineers in the house 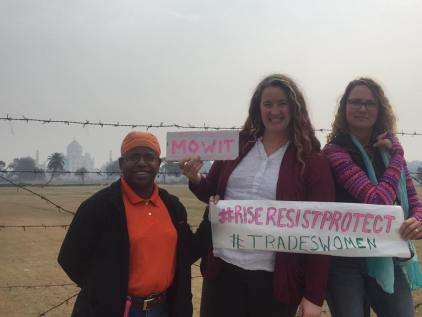 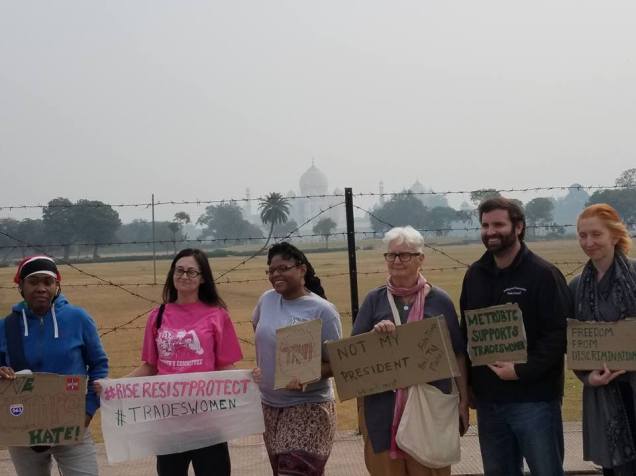 After our protest, we returned to our bus and went back to the Taj Mahal entrance to the monument. It is spectacular and beautiful. I was so wrong about not wanting to see it. No one who comes to India should miss it.

It is a tomb for a lost love and a treat for anyone who loves symmetry and/or construction. It made a lot of us very happy. It was a Saturday and there were a lot of people there but it is so big that you don’t need to be in crowds. It is also spotlessly clean and vendors are not allowed inside.

It is very peaceful place and we had a terrific day. 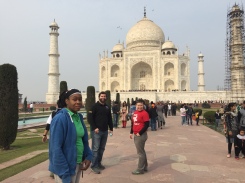 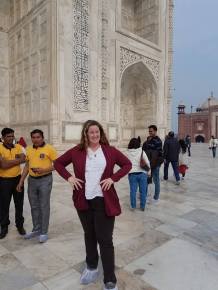 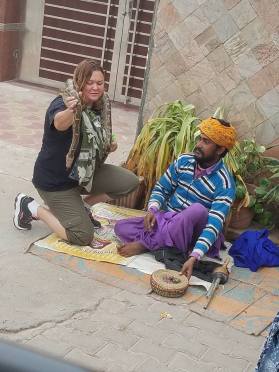 The day wasn’t over yet. We stopped to use a washroom before our long ride back to Delhi. While some of us were using the facilities, Holly got acquainted with a snake charmer. I don’t know exactly how it happened but she got even more acquainted with the snake.

It was a long day and a great day.