On our last day in Noida, the staff of VV Giri arranged a bus and a translator to take us to a naka, a village intersection where construction day laborers wait to be hired by contractors. This system is familiar to many in the US where urban immigrants – almost always men– wait for work on residential and small commercial construction sites. If you have not seen a naka in the US, check out the parking lot of your local Home Depot at 7-8 am. In the US and India, these workers are in the “informal sector” or the “underground economy,” meaning they are paid in cash and have no benefits or workplace protections. Several differences exist in India. The nakas are huge, highly visible and not hiding from the law. And, in the past, half of the workers waiting were women. This has changed recently and the number of women construction workers in India has dropped dramatically. As I described in my original proposal to Fulbright for this project, “women’s work” in construction, the so-called unskilled labor of materials moving and tending, is rapidly being mechanized and replace by technology. And a second and unforeseen change has accelerated the process of driving women from the industry. As Beth Barton, Tradeswomen Delegate and Carpenter from Kansas, will describe below, on November 9, the people of India woke up to demonetization.

Imagine that tomorrow you woke up to find that the government had — overnight– declared that $10 and $20 bills were worthless and you needed to turn them in for new bills. (And there would be no more $20 bills, only $50). This is what the Government of India did on the night of November 8. I will leave you to google and wikipedia for the explanation(s) and the controversy, but one picture will give you an idea of the impact on the wider population. 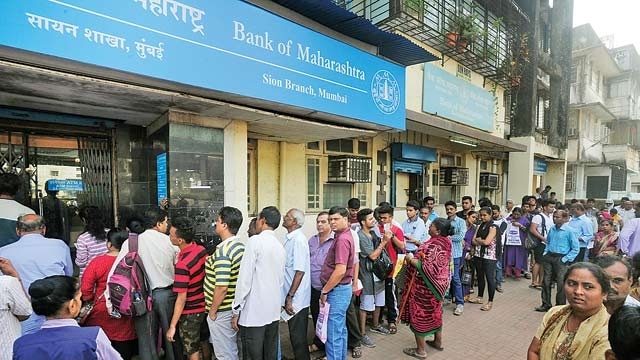 In this video of a woman laying brick, see the construction workers’ children in the background at about 20 seconds in.

This will provide you with some background and context for Beth’s story below of our trip to the naka and the amazing visit we had on a bus with ten unemployed women construction workers in Noida. 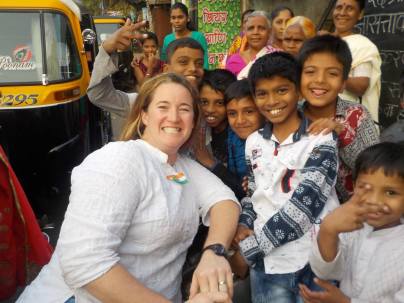 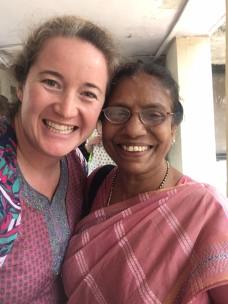 “This morning we went to a Naka, a corner where construction workers are hired for the day. What an experience. Twelve of us from the delegation with one interpreter all piled out of the bus on to the street corner where hundreds of Indian’s mostly male were standing. We followed Susan through the crowd looking for women workers.

When we found them, we began talking to them through the interpreter. Immediately swarms of men surrounded us, and we begin the slow process of trying to ask questions, then moving away to a quiet area to talk, only to be followed by the swarm of men. We moved several times and there were a few men who are very vocal and aggravated us as we talked to the women. I was pretty uncomfortable about it, I felt threatened. I didn’t like being at the center of 100 men’s focus. 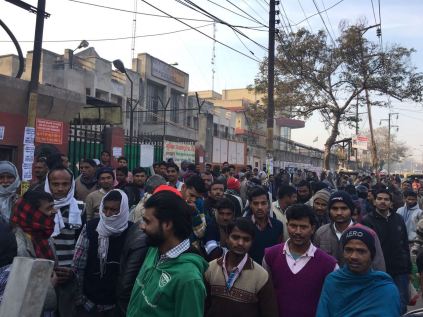 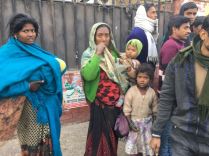 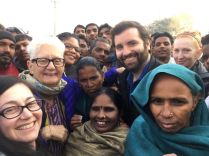 At several points I thought we should all run for the bus, like when we were in front of the food stand, when Susan was yelling at the one men to leave us alone, I thought, “shit be nice so you don’t piss them off, because if they decide to get mad at us…” Fortunately, shortly after that someone had the great idea to take the women back to the bus, and the walk there was comfortable while we were being teased – or something like it – but it was hard to tell what the men were saying to me in a different language. I was so glad to get back to the personal space and safety of the bus. The women workers didn’t seem intimidated at all by the hundred men or so and proudly turned their noses up at them, taking our hands and walking away. 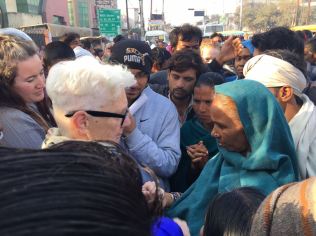 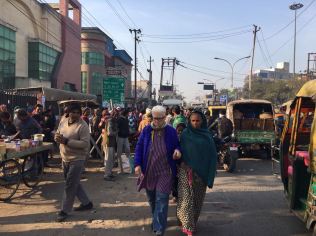 Once on the bus, everything was wonderful. The women were glad to come with us and asked if we could hire them for work. As we all sat on the bus with the 10 Indian women construction workers we began the process of developing who we were and what we wanted, and they begin to understand and started asking questions. The exchange of questions and answers began to form a picture. 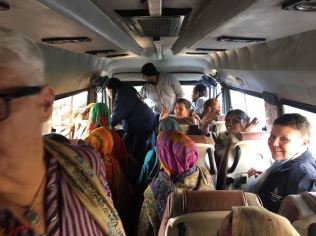 Most of the women said they were single or widowed, all were from small villages in the state of Utter Pradesh. Most of them had not worked for about three months. The recent demonetization (removal of the Rs.500 and Rs.1000 bills in November 2016) has put a strain on the construction industry, which largely operates on a cash basis. The women said they usually earned Rs.200–250 a day, as compared to the Rs.400 male workers made. They were the last to get hired for work, yet these women seemed to be in good spirits. They were excited to be with us, and happy to answer any questions we had. I thought they would have reservations about getting on a bus with 15 strangers, but they didn’t. I thought anyone who hadn’t worked in months and looks like they hadn’t eaten much lately would be angry, but they weren’t. I expected them to be utterly defeated in spirit, but they weren’t. These beautiful, strong women were energetic, and lighthearted, and spirited. I didn’t need a translator to feel a strong connection to them, and I felt like they were feeling it too. 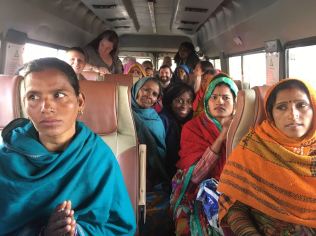 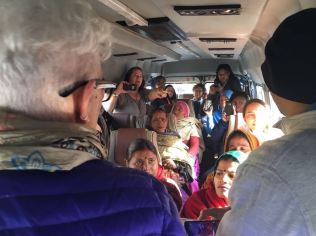 I was so humbled. These women are my idols. I wish I could be more like them. I wish we could’ve kept them with us, and brought them home to America, to give them all good food and jobs. But since we couldn’t do that we put together enough money to give them Rs.300 each [to compensate them for the day’s pay they missed by getting on the bus with us], and drove them away from the crowd, and they got off the bus. They were excessively grateful, passing blessings over each one of us. Saying goodbye was sad. I didn’t want to leave them without a solution. I am hoping the rest of the trip we will build a network to connect the right people and start to change the plight of these women. I want to bring hope to them, as they have brought hope to me. Thank you women construction workers in India!  I deeply appreciate the opportunity to have met you!!”