It seemed that everywhere I went in India that the theme of light followed me around.  (I later learned from my time here that light and the concept of “light” is very important and is considered a sign of blessing here.)  There were lights on the entryway and stairs leading up to our official welcoming ceremony at Archana Women’s Centre.  There were giant, ornate oil lamps glittering with light at our formal inauguration ceremonies, a practice that is common within the local culture.  I saw quotes about light and a shirt centered around it as well.

And then, there were the actual fireworks and a bonfire to celebrate friendships forged among the women of Kerala at one woman’s bachelorette party.  But, where I truly saw light shining the brightest is in the life of Thresiamma Mathew.

Ms. Thresiamma Mathew (in green) and the women of Archana Women’s Centre welcome Building Bridges founder, Susan Moir, on her first visit in 2016.

Ms. Mathew founded Archana in 1989 after working with men and later women on the Total Sanitation Programme, a government project to construct toilets (bathrooms) for local communities.  While on the project she observed that the women only had the role of mason helpers rather than masons.  As such, they were paid a meager 35 rupees rather than sharing equally in the 450 rupees given to the mason and his helper.  While investigating further, Thresiamma learned that women were not seen as capable to be masons by societal standards.  This motivated her to take up the fight for women’s equality and spurn the notion that women were incapable.  Eventually, she devised a successful plan of pairing one male mason with a female to work equally, where both helped each other build the toilets, and thus the community saw neither as the “helper.” Over time, the women became accepted by the community while simultaneously gaining a skilled trade alongside male allies building over 15,000 toilets in the Thrissur district alone.

From this humble beginning in the fight for social justice, a holistic empowerment and skills training program has evolved including carpentry, masonry, electrical, plumbing, and ferro-cement technology within the skilled trades.  The women of Archana have gone on to build multiple residences (now housing renters), a woodworking and furniture workshop, a waterfront bamboo pole home, lightweight cement water tanks, and various cement block walls among the many projects they’ve been involved with.  Additionally, there are non-construction classes such as financial literacy courses, workshops on life skills, paper crafts, beautician courses, and taxi driving classes for the women.  Thresiamma and her center are also highly involved within the surrounding local communities with their Community Action Groups which not only build solidarity among women but also inclusivity, entrepreneurship, and self-reliance.  As of our visit, more than 5,000 women have come through Archana Women’s Centre with 350 completing training in carpentry alone.

On a more personal level, I wish to thank Thresiamma, all of the staff of Archana, and the men and women working on the various construction sites for being generous with their time.  Having met Ms. Mathew and some of the original delegation at the 2017 Women Build Nations Conference in Chicago and committing to lead a team back to India, I can honestly say that this trip was simply spectacular!  I am grateful to have gained another international sisterhood and to have had the powerful opportunity to learn different construction techniques and skills from my fellow tradeswomen in Kerala.  After two years of dedicated, transnational planning with the three other co-leaders and many delegates, I was ecstatic that the trip went so smoothly and accomplished the goals of Tradeswomen Building Bridges!  May the light continue to shine brightly in my life, in Thresiamma’s life, and in the lives of our trade sisters in India as we all endeavor to propel the international tradeswomen’s movement forward and into the spotlight. 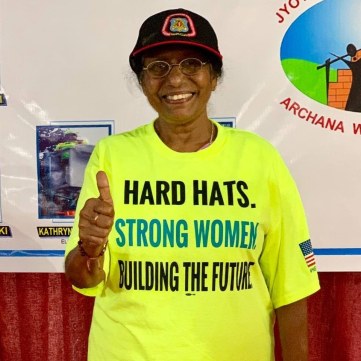 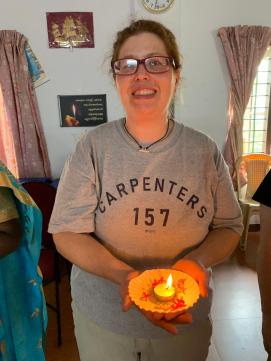