Still Building Bridges: US Tradeswomen are returning to India

In November 2019, a delegation of tradeswomen from around the United States will be joining women construction workers in Kerala India for Building Bridges: The 2019 Tradeswomen’s Training Exchange. The trip will be led by Carpenter Amanda Johnson of New York City, Electrician Noreen Buckley of San Francisco and Carpenter Amber McCoy of Portland, OR. A dozen other tradeswomen, including bricklayers, plumbers, millwrights and laborers have applied to join the delegation. Details are being finalized. The Training Exchange will be hosted by the Archana Women’s Centre in Kerala where women have received training in masonry and carpentry for several decades. The beautiful building that houses the Centre was built by women.

Following the Training Exchange between the women of Archana and the US tradeswomen, the delegation will go on to meet with union affiliates of the Builders and Woodworkers International (BWI). “The BWI is the Global Union Federation grouping free and democratic unions with members in the Building, Building Materials, Wood, Forestry and Allied sectors.”  BWI representatives participated in the 2017 Building Bridges Delegation’s Conference at VV Giri Labour Institute in Noida, India and attended the 2018 Women Build Nations Conference in Seattle. Along with the International Trade Union Confederation (ITUC), BWI has recently published a report, “Count Us In! Women Leading Change,” about the need for greater power for and leadership by women in the global trade union movement. BWI is also in discussions with Building Bridges and many other tradeswomen’s groups on a plan for an international conference for women working in the construction trades in 2020.

Here are a couple of excerpts from Count Us In! 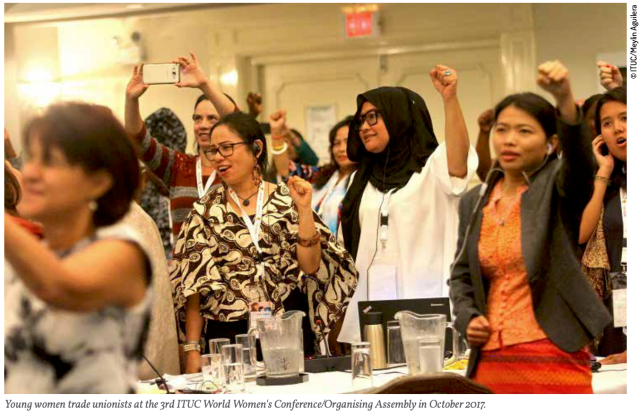 1 Response to Still Building Bridges: US Tradeswomen are returning to India