I am in the library working – struggling –with two presentations I will be making on Thursday and Friday. The first is on my research here on women in construction. I will be presenting to Women’s Studies students. The second, by request and to a larger group, is on the US labor movement. I have titled it, “The Peculiar History of the Labor Movement in the United States.” I say ‘peculiar’ because, with the absence of class consciousness among American workers, why do we have any unions at all. And will we have any unions at all when Friedrich v. California Teachers Association is decided by the Supreme Court in the next few weeks? Anyway, that’s depressing so I thought I would share my day in the Mumbai slums.

And that is the last time I will use the word ‘slums.’ The poor of Mumbai live in settlements, resettlements and nagars (nagar: a town or a suburb). Their homes are nearly entirely self-constructed from found materials. But over time, people pour concrete or use bricks and build permanent housing and then, like my grandparents did, they build up and out. On Tuesday of the past week, I went on a tour of Mumbai’s M-Ward that was sponsored by the conference I was attending on Rethinking Cities in the Global South. Mumbai is divided into administrative districts designated by letters of the alphabet. M-Ward has the lowest Human Development score, which measures health, education and income, of any place in Mumbai.

TISS, where I am living, is located in the M-Ward and has had a long time partnership with residents and organizations. They have an 8 1/2 minute video, M-Ward: From the Margins, that is better than any pictures I took.

I will tell you about what I saw and who I met.

First we went to Cheeta Camp. We went to one of the settlements’ schools and met with community activist Abul Hassan. Classrooms are around a large center courtyard. Chairs were set up for us to sit in a circle in the courtyard and talk with Hassan. We were not there long when bells rang, children from all directions cheered and the courtyard filled with kids on their break. Many stood around the circle and listened, some played games including the ubiquitous badminton.

Cheeta Camp has about 110,000 residents and 11,000 households. They have 14 schools and 95% school attendance. Some kids go onto higher education and go to work in call centers. Some become laborers and migrate to the Gulf to work. This settlement has been moved at least twice since 1950. They were originally in many areas in central Mumbai but were forced out when their land became valuable. They were moved to Janta Colony, a marshy area near the docks where they became the dockworkers. After 25 year, they were forced to move again. However, the government determined that only a small share of the residents were entitled to resettlement (lots of legalistic bullshit about who has some land rights and who has no rights), but the community created what Hassan called a Mighty Alliance and refused to move without everyone. The alliance prevented any single political party from cutting deals for their supporters and the residents engaged in civil disobedience. They won and all the residents moved to their current location. They continue to fight for legal title to the land and continue to be threatened by government and developers who see the land as having increasing value. You can see the contrast in the photos where some residents have been able to make improvements in their streets with tile and a roof that makes a very big difference in monsoon season.

Maharashtra Nagar Transit Camp is not so settled, not so unified and its residents are living in substantially worse conditions. Seventy-six thousand people live there in 5850 households. The oldest part of the camp is ten years old. The camp spreads along open fields for about a half-mile. The end nearest the main road has electricity but none of the residents have running water. Water must be carried from a great distance. There are no toilets and residents use the field across from the camp. There is only one school and no health services. There is a pre-school in the camp but residents said that they resell food that they have received for the kids. (If you have not read Beyond the Beautiful Forevers, I recommend it. Small handouts to very poor people do not help and do perpetuate divisions among neighbors.)

But there are community leaders in the settlement and they are organizing. They are part of the Make Your House/Save Your House campaign and the citywide people’s movement to secure the right to housing for all.

The best time I had in Maharashtra was in a section that is built along a trench next to the railroad tracks. The small shacks on the left are the toilets people have built. The city and/or the railroad will come along regularly and bulldoze them down. Then people rebuild them. The tarp on the right are the residents homes. The buildings are nearby apartments.

This settlement seemed to belong to the women and children. The kids followed us and asked questions in English, “Whose your mom?” and copied our answers. “Dorothy.” “Dorothy!” from a chorus of 7 to 8 kids. Me: “But she died.” “But she died!” “Whose you dad?” “Henry, but he died.” “Henry, but he died!” The moms invited us into their homes and offered us sweets and desserts. We all had a very good time together. 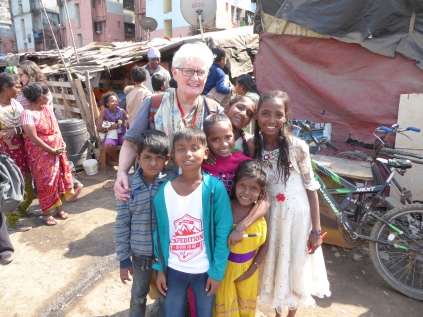 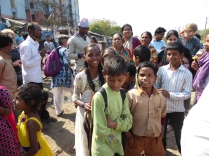 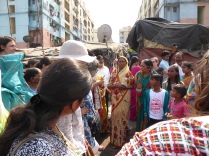 Our final stop was at Mandala where the women welcomed us with garlands and anointed our foreheads with bindis. 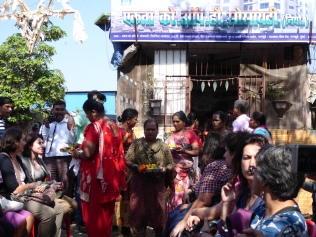 The men took over to tell us the story of the 16 year old camp which is very well established with 1200 homes and a commercial area. But they still battle the government for land rights, water, sanitation, electricity and education. The final speaker, Ateek, was the young—or maybe not so young—lifetime guy organizer we all know, sometimes get annoyed by but love all the same. Not listing them by name but I am tempted. He taught us the Hindustani call for collective action in the settlements and maybe among social justice activists everywhere. Zindabad!

Our very able guides on the tour, Richa Bhardwan (I think) and Purva Dewooklar, who works at the M-Ward Initiative at TISS. My thanks to them and to Leena Joshi for an education in the settlements of Mumbai.

5 Responses to A visit to M-Ward